In the period from May 15 till December 15, 2016 open term currency deposit at any branch of the bank and become a Participant of the main prize drawing — Chevrolet «Captiva» and other valuable prizes.
Who may participate in the Promotion?
Any capable person who has reached the age of 18 and is a citizen of the Republic of Uzbekistan.
How to become Participant of the Promotion?
You need to open any term currency deposit at the "Kapitalbank" JSCB (hereinafter - Organizer) in foreign currency in the amount of at least 1,000 (one thousand) USD/EUR/GPB during the period of the Promotion. With that, this amount must be fully paid when opening a deposit.

You can see the Prizes - HERE

1.3. The number of open deposits does not increase the chances of winning the Prize;
1.4. Each Participant shall receive a unique code corresponding to the series and number of the document proving his/her identity;
1.5. The deposit must be valid on the date of completion of the Promotion;
1.6. The date of the drawing is December 25, 2016;
1.7. In case of early closing of the deposit, or at the end of the term of the deposit during the period of Promotion, the Participant shall lose the right to further participation in the Prize drawing;
1.8. Bank employees and their close relatives — parents, brothers and sisters, spouses, children, including adopted, grandchildren, as well as parents, brothers and sisters of the spouses cannot participate in the Promotion;

2. Terms of the Promotion drawing:
2.1. The winner will be determined on December 25, 2016 by simply extracting the lottery ticket, from a large transparent rotating drum by one of the members of the independent commission;
2.2. The Promotion is carried out in accordance with Article 981 of the Civil Code of the Republic of Uzbekistan;
2.3. The Promotion shall start on May 15, 2016 at 12:00 AM (Tashkent time) and end on December 15, 2016 at 11:59:59 PM (Tashkent time);
2.4. The Promotion shall be held in the city of Tashkent and in the regions of the Republic of Uzbekistan, in the network of branches of "Kapitalbank" JSCB;
2.5. In case of winning the Promotion, the title to the Prize shall pass to the Participant at the time of paying personal income tax and signing the Acceptance Certificate of Prize. From that moment the Organizer shall not be responsible for the risk associated with the loss and / or damage and / or destruction of the Prize.
2.6. By accepting the terms of the promotion, the Participant agrees to publicly disclose his/her identity, subject to winning the promotion.

5. Additional terms:
5.1. The Organizer has the right to change, exclude or supplement any terms and conditions of the Promotion at any time, as well as introduce additional terms at its discretion, notifying the Participants by posting the appropriate message on the website www.kapitalbank.uz no later than 10 (ten) calendar days before the commencement of the new conditions of the Promotion.

Additional terms for the Participants of the Promotion are - HERE 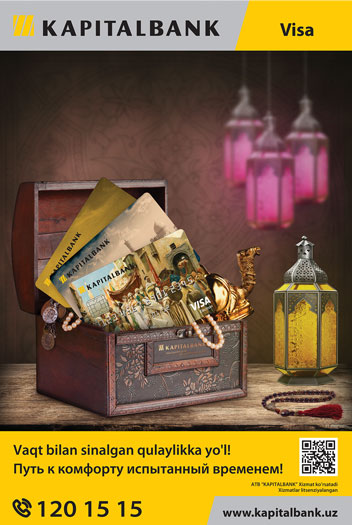